a question about Keynesianism

In the comments under this post at the blaawg Lenins Tomb someone asks:

"I sometimes see leftists argue that the current bourgeoisie is destroying itself by immiserating wage-laborers. They claim that the capitalist system requires workers to buy wage-goods at a certain level, or production will be unbought and profits unrealized. But couldn't the solution be to reduce wages (and increase exploitation) and then sell more ... capital goods, government goods, and luxury goods"?

This cat is asking, what if the bourgeoisie won't realise their surplus value or allow real wages to increase? I suppose in an economy with a commodity for money, there would be permanent deflation, with effective demand being continually reduced by the hoarding of money, and a certain amount of involuntary unemployment. However, this isn't what we see in contemporary capitalism, where there tends to be unemployment and appreciable inflation.

It seems that you can generate cycles of expansion and recession, in hypothetical models, by making the assumption that the bourgeoisie impose an artificial maximum income on themselves. This would be an alternative way of generating cyclical dynamics in a model of capitalist development. It's a different way of getting a Keynes or Minsky type theory. I'm not sure it's strictly correct, though.

Actually, re comrade's trip to Bradford, isn't the EDL basically a government scheme to employ ex soldiers with Smallhausen Syndrome? to put off anyone opposed to the war?
Posted by catmint at 1:28 AM 1 comment:

It is very sad when people end up with schizophrenia, because of drug and alcohol problems, because they've served as soldiers in Afghanistan, or when people lose arms and legs serving in this war. But the propaganda line of the charity "help for heroes" - that the war in Afganistan is heroic because it inflicts injury on British Army soldiers - is ridiculous. I suppose people think that the tangible benefits that this charity provides to injured soldiers makes the tacked on propaganda message OK. I would have thought they were two different things. It seems that, if you dole out a few pounds to the needy, you get to decide what's true and what's not true, just like in the middle ages. What might British Army soldiers have done in Afghanistan?

Perhaps they locked up a taxi driver for years in a metal container, on the basis of false rumours,

or, fired missiles at a wedding reception, then paid $500 to the relatives of the people who died,

or, machine gunned a bus, then falsely claimed the people who died were resistance fighters,

As I understand it, mostly they sit in the base, or patrol half a mile round the base, checking for IEDs. It would have been better to use the name "help for heroes" for a charity providing for retired racehorses, and collect money for former soldiers in British Legion boxes.
Posted by catmint at 12:40 PM No comments:

AGAINST "PARTICIPATION": A Total Critique of Culture

this is from an archive of articles by Henry Flynt, criticising the pretensions of the artistic culture, so called, into which he'd been - "elevated" - I suppose is the word. There are also some interesting pieces on the Henry Flynt site about Economics and Hill Billy music. 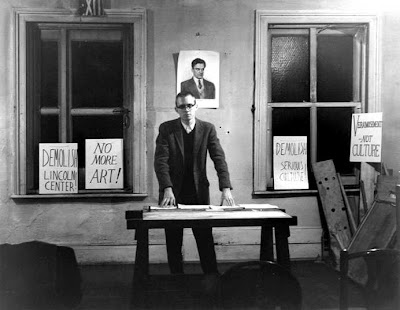 I suppose I'm lucky in being able to be unserious about serious things. Henry Flynt's general attitude is dead right in this picture from 1963. I also find it pretty funny.
Posted by catmint at 8:52 AM 1 comment:

I was quite surprised the other week to see that the "Beller Meme" had somehow leapt the syntactic grid from Qlipoth to K-Punk abstractdynamics:

If, to use Jonathan Beller's phrase, "to look is to labour" - if, that is to say, attention is a commodity - then aren't we all "contributing", whether we like it or not?

is this true? The public's attention isn't fulfilling any useful function of itself for the advertiser. The advertiser wants the attention of the public only to achieve higher profits, by selling more or selling at a higher price. But that profit has to be realised from total social production, which is diminished by resources being allocated from production to advertising*. The advertiser's gain is the social product he's able to arrogate to himself. The advertising he commissions does not form part of this product, or anyone else's final product or make active means of production more productive. As a social phenomenon the advertiser makes a deduction from the total social product in order to privately appropriate a larger share, in absolute terms, of that product.

I don't expect anyone will be convinced by this, but really, looking at ads isn't labouring, and we aren't contributing by doing it.

** i.e. lower than the technically determined rate of profit on the commodity value of active means of production.
Posted by catmint at 5:11 AM 3 comments:

Distracted by this virtual capitalist Sodom, we as the proletar subjects of the future fail on our historic mission - mounting the Resurrection of Comrade Stalin from the love handles of Comrade Slavoy Zizek. We DEVIATE, comrades and comradesses, from the path of freedom. Instead of washing our own laundry, we allow the corrupted Capitalist Machine to do it for us.

What's clever about Dejan's parody is that it doesn't just exaggerate Jodi Dean's analysis, but it exaggerates one aspect while forgetting about another aspect.

Essentially, the parody sets up a contrived choice for the sociologist studying American people, between seeing Americans as:

a. dispossessed and disenfranchised proletars

b. comfortable and enfranchised citizens

Jodi Dean's picture of Americans as belonging to category a. is portrayed as ridiculous (I don't know if this is Dean's real position: I haven't read her book. I'm just going by the parody). Consequently category b. ought to be correct. But really, somewhere in the middle would be more correct, because most Americans don't have real political representation, and quite a few are really immiserated. The desire for middle class Americans to have political representation really doesn't necessitate them identifying themselves with nineteenth century factory workers.

But, in a daring dialectical twist, Dejan pretends to have forgotten that Dean's apparent category of barelife proletars presupposes a social technology productive of a proletarariat. A second contrived choice is established concerning the degree of autonomy of Americans, who might be:

a. free to choose freely

b. constrained in their choices

If we map Dejan's categories onto the sexuation graph, you can see what I mean.

Orwell - official mascot of the London olympics
Posted by catmint at 1:23 PM No comments: