what we need (2): monuments in coloured metal

I saw yesterday that the mayor of London has proposed the building of a giant artpiece, almost as high as the Blackpool tower, for the London Olympics.

the mayor said the Olympic park had needed something extra to arouse "the curiosity and wonder" of Londoners and visitors. 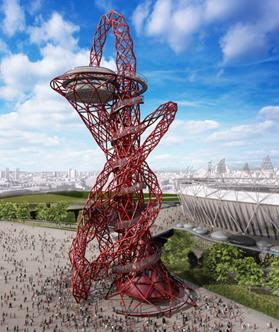 Kapoor and Balmond's Orbit, which will be placed between the aquatics centre and the main stadium, was chosen from a shortlist of three, beating tower-based bids by the artist Antony Gormley and the architects Caruso St John.

Some people have ventured criticism of Anish Kapoor's proposed tower, either because of the cost, or because they favoured Damien Hirst's design, which was to have been a giant statue of a cod fillet in batter, entitled "Jesus Christ (in the presence of children)". But most of the cost of the new structure is to be met by its sponsor, Arcelor Mittal, and for a relatively modest three million pounds of public money, London can house an impressive representation of modern ideology, in coloured metal.
Posted by catmint at 3:08 PM No comments: