In a typically wry notebook entry, Marx observes that while credit is protestant, money is catholic. Is money catholic? Insofar as the expansion of money debauches existing wealth, we can say with certainty that it's fundamentally illiberal; it violates the liberal principle that in any transfer of wealth, consideration should be given and recieved: it takes without giving.
Posted by catmint at 12:18 PM 1 comment:

a model of broad money expansion and inflation

Suppose we look at how an increase in the money supply will impact on a commodity economy subject to fiat paper money or credit money. In both cases we assume that money is created in order to be spent; that is, it represents a straight addition to effective demand. In the first case, it's fairly obvious that the increase in paper money represents a sort of tax on other holders of money in the economy, in proportion to the amount of money they hold. In the second case, the expansion of credit money would have the same effect, provided the same rate of net increase in the money supply can be achieved. But since any particular bank loan is eventually paid back or written off, it doesn't seem obvious that anyone in particular benefits from this process.

In terms of the loan principal alone, borrowing and repaying in a period of rising prices ought to benefit the borrower. But the amount of his gain will, one assumes, be more than offset by the interest repayment, which is a straight transfer of income, and does not affect the money supply directly. The interest repayment will, however, contribute to the banks' profits, and so allow them to increase lending in the next period, maintaining inflation and the debauchery of honest capitalist profits.

The diagram below represents a simplified picture of this process, assuming the amount loaned out in 2006 is repaid in 2007 etc. It includes only the principal on loans, but the expansion of the process is predicated on interest payments. 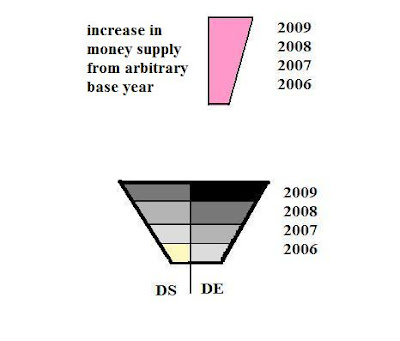 ironic diagram via microsoft paint
Posted by catmint at 8:15 AM No comments: