the labour theory of value

There was a nice tribute to Joan Robinson in the Guardian the other week, which might just have sold a few copies of her Economic Philosophy (3s 6d, the only Robinson book you can easily get). This is a nicely written, and appropriately sceptical, book about economics for the general reader. But for some reason Robinson has a horrible, mystical understanding of Ricardo's labour theory of value. Since the labour theory of value is the basis for the theory of free trade, I think we had better try to reconstruct Ricardo's theory, in the interests of the continued supply of consumer tat. 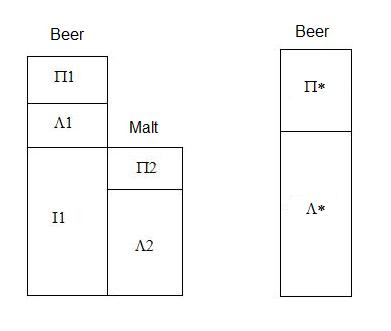 I1 represents the cost of intermediate goods. This is meant to demonstrate how the price of beer can be broken down to labour costs and profit. I actually regret using the greek letters now.

2. If profit is a function of capital employed in any industry, and tends to an equal rate, across industries and transhistorically, then the sum of all decomposed profits contributing to the price of a commodity will be related to the total capital employed in its production, or decomposed capital, K*. In this case:

where the coefficient "a" is a constant.

if this is the case, profit can be expressed as a function of decomposed labour costs:

since a commodity's price is the sum of Π* and Λ*, the price, "p" is equivalent to

4. However, if production is split between different capitalists, for instance if one capitalist produces malt as an input for another capitalist producing beer, then the capitalist working with the produced input, the beer producer, evidently has direct costs exceeding the decomposed labour of his input cost. His costs also include the profit of the malt producer. If the normal classical rule for capitalisation of costs is applied to each capitalist's direct costs, then total capital will cease to be a linear function of total decomposed labour costs.

I've tried to show that Ricardo's labour theory of value was a reasonable scientific theory, and in no way mystical, and why prices in modern industrial capitalism aren't a linear function of decomposed direct labour costs. This fact doesn't invalidate Ricardo's economics, which works just as well with varying rates of capitalisation and profit, it just complicates things. Marx uses "labour" to describe the sum of profit and labour costs, so the price of any good equals its labour value by definition.
Posted by catmint at 1:00 PM No comments:

I could have mentioned, with regard to the last piece, that as well as worse patterns of levy on the productive economy, the other main cause of monetarist recessions is senseless restructuring of industry, like the current British government's policy to restructure the nhs.
Posted by catmint at 9:50 AM No comments:

a thing about Stiglitz

I'm not sure that this article in The Independent on Sunday represents the best of Joseph Stiglitz. It may be that they just talked to him outside a nightclub.

The guy writing the article is way too impressed with Stiglitz's pseudo-Nobel prize win. They gave this prize to Hayek for a theory of capitalism without profits, which Hayek held to because he thought the notion of profit was communist. The real Nobel committee gives out a prize for genuine breakthroughs in medical research. I would be ashamed of getting the pseudo-Nobel economics prize, and having journalists imagine it was a comparable achievement to curing kids with cancer.

On the other hand, you win enough money to buy a speedboat and a Tuscan villa. Anyway Stiglitz goes on to explain:

"The thing most economists did not fully grasp was the extent to which the banks engaged in murky risk-taking activities. They were taking a risk with our money, their shareholders' money, the bond-holders' money,"

...not to mention the money they generated. The Independent's writer continues:

"Banks were demanding up to 40 per cent of the corporate profits, saying their innovative financing was adding value. But "all this talk about innovation was a sham" because it did not relate to any real increase in the economy's productivity"

I don't think the banks tricked the corporate world out of their profits, exactly. This does approach a theory of an irrational levy imposed by one section of the capitalist economy (banks) against another (productive enterprise). This is important, but it isn't an explanation of crises. It would dampen, rather than exaggerate a boom, and wouldn't of itself generate a crash.

"There was a prima facie case of something screwy going on [with all the] perverse incentives that would lead them to take excessive risk. But there was no way anyone could know or believe that the banks were [conducting themselves] at that level of stupidity. I predicted that there was going to be a collapse because of the information asymmetry problems that were being created."

This is true, but making "information asymmetry problems" the main hinge of the process is sort of silly.

What I wanted to look at in the article is this part:

"If you have a household that can't pay its debts, you tell it to cut back on spending to free up the cash to pay the debts. But in a national economy, if you cut back on your spending, then economic activity goes down, nobody invests, the amount of tax you take goes down, the amount you pay out in unemployment benefits goes up – and you don't have enough money to pay your debts."

"The old story is still true: you cut expenditures and the economy goes down. We have lots of experiments which show this, thanks to Herbert Hoover and the IMF," he adds. The IMF imposed that mistaken policy in Korea, Thailand, Indonesia, Argentina and hosts of other developing countries in the 1980s and 1990s. "So we know what will happen: economies will get weaker, investment will get stymied and it's a downward vicious spiral. How far down we don't know – it could be a Japanese malaise. Japan did an experiment just like this in 1997; just as it was recovering, it raised VAT and went into another recession."

The whole problem of current economic policymaking is encapsulated in Stiglitz's ambiguous "you". Does he mean the government or the economy as a whole? Or is he really equating these things? There's no reason to repeat Keynes's mistakes and pretend that effective demand doesn't tend to increase year on year with increases in the money supply. And in a normal capitalist economy with persistant inflation, government spending necessarily imposes real costs on the productive economy, even pure monetary policy: writing off and reextending the government debt or printing banknotes. These are left wing errors. There are also right wing errors: it is believed that capitalism subsists as a single entity that aims to perpetuate itself. This entails a sort of blindness to the reality that banks or monopolies can institute levies on the productive economy as much as government can. A lot of the problems wrought by the IMF's monetarist policies weren't caused by restriction of the money supply, which they always failed to achieve, but by price deregulation imposing a worse pattern of levy upon the productive economy. A further error is the notion that the economy, if adversely shocked, will enter a "downward spiral", because there is no real profit, for which we have to thank, among others, Friedrich Hayek for his prizewinning stupidity.

Neither Washington nor Tehran, readers.
Posted by catmint at 4:45 AM No comments: