These are some notes that hopefully clarify, and put into context, the "hydraulic" model of Keynes' theory, I sketched out here.

1. Firstly, I think Keynes' General Theory is overdetermined. In order for the numbers for output, the rate of interest etc generated by Keynes' model to not be determined twice, ie in order to avoid having two contradictory numbers for one thing, some part of the theory needs to be cut. Basically, you can have either the de jure equivalence of savings and investments, or the technically determined schedule of the efficiency of capital, but not both. Orthodox (which for Keynes meant conservative) economics has generally kept the de jure equivalence of savings and investments (in shorthand "S = N") and forgotten about the technically determined efficiency of capital (which Keynes calls the marginal efficiency of capital, "MEC").

2. The MEC schedule basically relates the use of resources to the rate of profit. Keynes' thinking about this is probably somewhat influenced by Piero Sraffa's 1926 paper about the rate of profit in capitalist society, on the basis of which Keynes brought Sraffa to Cambridge. Sraffa's work is strongly influenced by that of Quesnay, Ricardo and Marx. Hence, there's more of a marxist influence on Keynes than one might assume from checking the index of Keynes' book. It's sort of irrelevant to call the schedule of the rate of profit the "marginal efficiency of capital". If capital markets are to be assumed to be reasonably efficient, marginal profit will be the same as actual profit, but calling it "marginal" makes it sound less like marxism.

3. According to the models of Marx or Sraffa, the schedule of the MEC would be upward sloping. Extra investment would increase the rate of profit, calling forth further investment, with a tendency toward full employment. Both writers examine other tendencies in capitalism which are capable of bringing about severe and chronic unemployment, such as has nearly always characterised capitalist society. In the first case technical progress and the business cycle, in the second monopolistic competition.

4. One of Keynes' innovations is in theorising a downward sloping schedule of the MEC, which determines monetary flows such that an economy subject to price rigidities can stall well below full employment, for want of sufficient effective demand. As output increases, the rate of profit falls, and more money becomes idle, setting a brake on the expansion of output. This intelligible, but as we will see false, model was briefly popular in the US after it was exposited in early editions of Paul Samuelson's economics textbook. It is sometimes called hydraulic Keynesianism. Since then, orthodox macroeconomics has been based on the Hicks-Hansen model, which requires that savings must equal investments. Hicks-Hansen essentially drops MEC to include S = N.

5. The notion that S = N is simply false in a credit money economy (it would only be true in very contrived circumstances). Later Keynesian economists, like Kaldor and Minsky, admit this without criticising Keynes very much for perpetuating this error, but whether or not we accept the de jure equality of savings and investments changes everything.

6. In reality there are three factors ordinarily influencing changes in effective demand: debt extended and serviced, saving and dissaving, productivity. Credit money normally expands with accumulation by the banking sector. Inflation is therefore normal in a capitalist economy, and with it the debauch of capitalist profit. Consequently we can only talk about the efficient use of capital in a capitalist economy vaguely and relatively. It is more difficult than Keynes supposed for effective demand to be reversed. A viable model dealing with the problems Keynes was interested in would need to untangle the notions of credit and money that are confused by Keynes, and situate the fluctuations in effective demand in secular history.

7. It might actually be better to think about a capitalist economy as having two currencies: credit money and cash, with a fixed exchange rate. This unfortunately might make capitalism appear bureaucratic, and hence, perhaps, inefficient.

8. I don't believe we can justify the Keynesian welfare state, or, indeed, the Keynesian military economy, on purely economic grounds. Either these things are worthwhile in themselves, or politically useful, or they are not. Keynes' arguments in favour of public works must be somewhat discounted because capitalist finance does anyway what public works were meant to do (l'inutilité, même).

9. Having said that, there might be something in the idea that a more equal distribution of income leads to greater total output. The explanation for this isn't in Keynes though.
Posted by catmint at 3:37 PM No comments:

inflation and the rate of profit

Suppose the surplus generated by an economy is a fixed proportion of total production. This might be imagined along the lines of an agricultural economy where a certain amount of the product must be distributed to the labourers involved in its production, and for replenishing the capital used up. We could assign a rate of profit on turnover, Π/Y, based on this information alone, as Quesnay did (or, indeed Sraffa).

If we also know the price level, we can establish the value of working capital, which, ignoring monopoly titles etc, consists of commodities and money. We can consequently calculate the rate of profits proper, Π/C.

The effect of inflation on this economy, if all prices adjust to changes in efective demand at the same rate, will be to increase the values of C, Y and Π proportionately. But real distributable profit: the possible claim on production from profit, is diminished by the increase in the money part of capital. Real profits correspond to Π - ΔMC.

Consequently, inflation can serve to reduce the rate of profit, by a ratio dependant on the monetary composition of capital, and the existing rate of profit.

Possible secondary effects of inflation, through changes in distribution and the scale of production, or changes in methods of finance, have been ignored in order to isolate this primary effect. 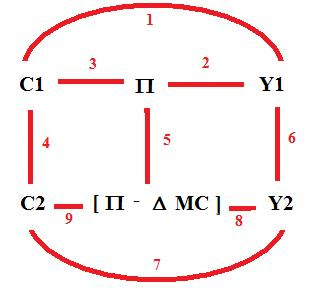 Economists have sought to develop a science of economic effects, and because there generally isn't a ready terminology for classifying these effects, they tend to be named after other economists; for instance, the effect by which the value of savings is altered by a change in prices is called the Pigou effect, after Arthur Pigou.

It might be appropriate, therefore, to name the effect whereby social insanity is rendered invisible by the surface appearance of technical competence after former Federal Reserve Chairman Alan Greenspan: "the Greenspan effect".

Greenspan certainly wasn't insane himself, he merely entertained some kooky ideas, but it was crazy to appoint him to such a position, taking into account the interests of American capital, or the American public.

It's interesting that for a long time Greenspan was viewed as a sober technocrat, with a harmless private interest in Ayn Rand and Milton Friedman, while subsequent events have demonstrated that he was a confirmed crank who should never have been given such high office. Perhaps in a more rational society Greenspan could have been in charge of the White House stationary budget, but not the Federal Reserve!

At the risk of jeopardising any future career in the banking sector of the British Socialist Federal Republic, I might suggest that the invisibility of Greenspan's eccentricities followed from the technical success, at least in relative terms, of the neoliberal ideology for local managers and bureaucrats, and that it was thought that the success of the ideology at this "common" level implied that it worked at a higher "celestial" level. There was no celestial level, but such is neoliberalism.

These unproven conjectures, running along their own course. can be followed in the opposite diretion, so that correct ideas can be invalidated on account of disharmony with current practice, as much as false ideas can be validated insofar as they are in harmony with this practice. This is what occured to me when I read these comments from the new paper of record, on the subject of Peter Hallward's article in the Guardian about the historical background to the disaster in Haiti.

Perhaps some of the readers of this newspaper imagine that an editorial by a university professor ought to be something like the celestial reflection of a reasonable person's common sense ideas. Hallward is taken to task for writing a piece that isn't consonant with the readers' ordinary experience. The celestiality of Hallward's article is granted, but its genesis and consequences can only be bad, because it sits badly with ordinary experience. Peter Hallward, or perhaps Middlesex University as a whole, appears as a sort of bad planet, interfering with the organisation of things.

A consequence of this way of looking at things is that it might appear that the defence of the victims of the Haitian earthquake ought to involve, in addition to direct aid, defending them from the malign influence of Britain's bourgeois left.

Actually, this attitude does neither any favours. What it defends is the right of Haitians to a thorough British ignorance of Haitian history and politics. But they are necessarily already acutely aware of these things; their innocence does not need to be protected. Haiti is a very polarised society, and different groups might give different answers as to whether or not President Aristide's deposition was a good thing, but the facts aren't really controversial.

So, the British newspaper reader might imagine that Hallward's methodology and political tendency is foreign to Haiti, and as such represents a baleful influence. In fact, Hallward's article is methodologically orthodox, fairly representatitive of majority Haitian opinion i.e. the ideas of the L'Espwa and former Lavalas voters, and decidedly uninfluential for Haitians in Haiti.

If the past thirty years has been characterised by the exploitation of third world countries, facilitated through ostensibly neutral, purely technical, institutions: IMF, World Bank, UN - the institutional reflection of the Washington consensus - this process finds a ready ally in a western popular culture that views third world nations as unruly children: devoid of knowledge and experience, given to episodes of violent temper, requiring instruction.
Posted by catmint at 12:21 PM No comments: